On this page, you can access a range of useful ACEs films and ACEs resources.

The RAISE team worked with young people across the Liverpool CAMHS partnership to come up with this ACEs film. In conclusion, it captures real-life views on how ACEs can affect someone’s life, but more importantly, focusing on how accessing support really helped them overcome their trauma.

This ACEs film below is a video developed by Public Health Network Cymru called ACEs.  Above all, this ACEs film shows the effects ACEs and trauma can have on a child’s development, health and lifestyle.  In addition, it explains the cycle of generational ACEs. However is empathises that ACEs do not define you. This ACEs film shows the importance of why work needs to happen to support young people who have experienced ACEs.

How childhood trauma affects health across a lifetime

Above we have Nadine Burke Harris, explaining how adversity and trauma can effects the development of the brain. “This unfolds across a lifetime, to the point where those who’ve experienced high levels of trauma are at triple the risk for heart disease and lung cancer. An impassioned plea for pediatric medicine to confront the prevention and treatment of trauma, head-on.”

This ACEs film shows Olivia opening up about what life was like for her growing up with ACEs. In other words it shows how encouraging it was for her to get the support from professionals who gave her a voice. Above all, preventing the harmful effects ACEs can have on a child. 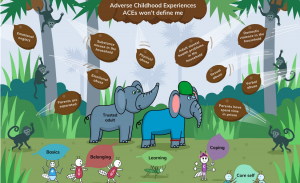