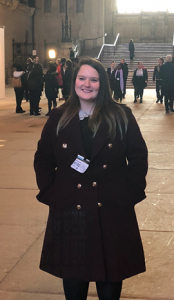 A young adult carer, Katie O’Shaughnessy, from the Barnardo’s Liverpool Young Adult Carers service has spoken to a Parliamentary Committee about her experiences of balancing caring responsibilities with work and university.

Katie is 24 and cares for her mum who has vascular dementia. When she was 19 her mum’s health deteriorated and she had to leave university to care for her full time. She became involved with the Barnardo’s service in 2015; they have enabled her to balance her caring responsibilities so that she could return to Edge Hill University where she is now studying English.

Few weeks ago Katie gave evidence as part of the Work and Pensions Committee’s ongoing inquiry into support for carers. She highlighted the support Barnardo’s had given her and told MPs about how this had helped her return to university and take positive steps towards her own career development.

As part of the inquiry the Committee are considering how workplaces and public services, such as Jobcentres, can work with carers to support them as they balance work with their caring roles. Katie talked about her experiences with the Jobcentre just after she had left university, saying their advice didn’t engage with her specific circumstances and that she, like many carers, found it difficult to know what she was entitled to as she didn’t identify herself as a carer for a long time.

The Committee have now concluded their oral evidence sessions and soon they will begin the process of synthesising their evidence. Then they will publish a report of their findings and make recommendations to government about how the support for carers, including young adult carers, can be improved. You can watch the whole evidence session here: http://parliamentlive.tv/Event/Index/8a15256f-5c6d-4fc8-9692-cd6979204fcd