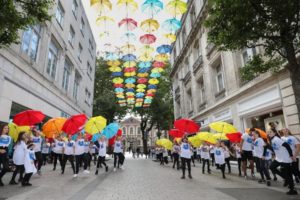 Over 100 Liverpool schools participated in The Neurodiversity Umbrella Project which celebrates the intelligence, ability and employability of all young people.

This involved staff, students and teachers presenting in assemblies about the many different types of intelligence and how we now recognise that 1 in 5 people have either dyslexia, dyspraxia, ADHD, autism or dyscalculia. Students learned about famous sportsmen and women, celebrities and politicians who have learning differences. They even learned about famous historical people like Albert Einstein who had autism and Leonardo da Vinci who had ADHD.  Many schools also had their very own Neurodiversity Umbrella Installation in their own school with brightly coloured umbrellas suspended from the ceilings – signed by students stating what their talents and abilities are.

The project involves BBC National Music day celebrations late September beneath the Umbrellas Installation in Liverpool City Centre and a final celebration at the British Film Institute in London who will be working with our Neurodiversity Young Ambassadors who will talk to the media about the Umbrella Projects that have now also happened in other cities and the very first Liverpool Umbrella Bus supported by Arriva Travel.