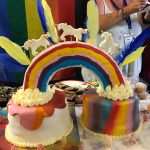 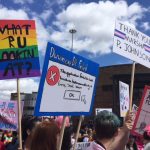 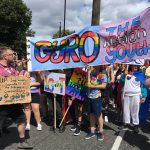 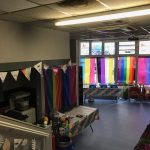 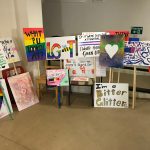 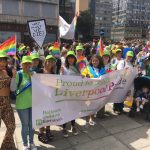 This is an important date in the calendar for LGBTQ+ young people, it gives them a chance to break out of their local community groups, often remaining hidden for genuine fear of discrimination. Over 100 people marched with us this year including parents, staff, young people and their allies. After the march we came back to YPAS-Central to party in a safe space free from party enhancing substances except for cake, we had lots of amazing cake!

It was obvious from the crowds attending and supporting the march that this was the biggest Liverpool Pride to date. You could really feel the love on the march and our young people were singing and dancing the whole way around. It was great seeing other LGBTQ+ youth groups from around the region marching too, all too rarely do we get to come together fitting for the #AllTogetherNow theme.

We’re so proud as staff at the effort put in by young people and our partners Comics Youth and Walker Art Gallery who helped us be super visible on the day with lots of amazing banners and placards.

We had a great party afterwards, there were refreshments, food, a DJ, and young people performed live thanks to equipment from the NOISE project at MYA. Over 130 people signed in, we’re going to need a bigger venue next year! Thanks to Liverpool Pride who are volunteer-led for putting on a great day from start to finish.