YPAS Staff perform ‘Nativity story with a bit of a twist’ 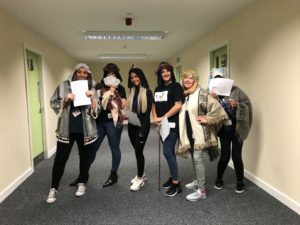 On Wednesday 12th December, the SMARTYS group at YPAS North Hub were the audience for the first-ever YPAS Christmas Panto during their Christmas themed session. The show was entirely written and performed by YPAS members of staff and proved a hit with the young people and families.

The “Nativity story with a bit of a twist” starred characters ‘Mary’, who’s Mum has instructed her to “mind the baby” (her brother) over the Christmas break; and her best friend ‘Joseph’, who is misunderstood by his family and looking for support.

The pair follows the ‘Smarty’s Star of the Week’ to YPAS, where they encounter the ‘Three Wise Women’ of YPAS senior management team; the hub coordinators as the ‘Innkeepers’ and the staff who facilitate the groups as the ‘YPAS Shepherds’.

“Lots of laughter and fun were had, and it really brought the young people, families and staff together. It was a great way to end our sessions, ready for the Christmas break”

“It was the best panto I’ve ever seen in my life!”