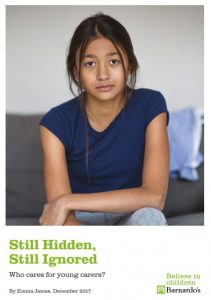 Eleven years ago, Barnardo’s undertook an in-depth research study into why so many young carers were remaining unidentified and unsupported in the UK.

The report Hidden Lives, Unidentified Young Carers in the UK found that there was a culture of secrecy amongst young carers and their families and that the support available from schools and agencies working with them was inconsistent and often unsuitable. As the report concluded ‘Many (young carers) spend years unidentified, unsupported and isolated in their caring responsibilities’.

Over a decade later with significant changes in policy along the way, many young carers are still being failed by the numerous agencies they come into contact with. Some are not being identified and are not receiving the targeted and consistent support they so desperately need. It continues to be hit and miss as to whether schools are aware of the reality of their situation and are equipped to putting safeguards in place to ensure there is a whole school approach to offering support.

Drawing on research conducted with service practitioners, teachers and young carers themselves, this report makes a number of policy and services recommendations. What underpins these recommendations is that the responsibility of effectively identifying and supporting young carers needs to be solidly ingrained in all agencies. Clear pathways must set out for practitioners both working with adults and children to ensure that these children and young people do not continue to be failed and forgotten

Barnardo’s Action with Young Carers has been heavily involved in this research  – contributing Liverpool-based best practise studies. To read the report, click here 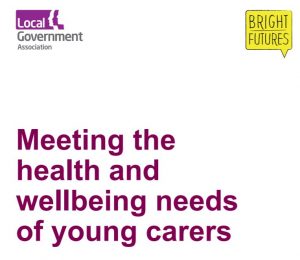