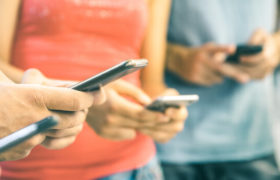 This report was commissioned by Merseyside Youth Association (MYA) on behalf of the Liverpool Child and Adolescent Mental Health Services (CAMHS) Partnership. The first section of the report reviews the research evidence as to what is known about the relationship between mental health and children and young people’s use of new technology. This has largely been undertaken via an internet search and its focus informed by an initial survey of members of the Liverpool CAMHS partnership and other key stakeholders.

The second section presents the evidence from research undertaken on behalf of the Liverpool CAHMS partnership. A survey of 339 students taking part in the Liverpool primary and secondary School’s Parliament was undertaken in September 2015. Findings from this have been supplemented by results of early surveys of Liverpool students. In addition, this report provides commentary from a facilitated workshop for Liverpool CAMHS workforce representatives. It also includes findings from six focus groups undertaken with young people and two with parent / carers.

A significant challenge in undertaking this work has been to give the research a clear focus given the potential scope of any research encompassing mental health, children and young people (C&YP) and new technology. Priorities for the first phase of this research were identified via a survey of the Liverpool CAMHS partnership workforce in June 2015, which was completed by 70 people.