News > Children & Young people > #TicketToPride will shortly be arriving in Liverpool. Are you ready to jump on board?

#TicketToPride will shortly be arriving in Liverpool. Are you ready to jump on board? 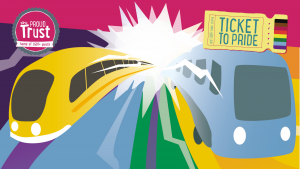 Our Ticket To Pride campaign is a North West-wide arts-based campaign challenging LGBT-phobic hate crime on public transport. Vast numbers of people across our country use our public transport systems to go about daily business but, for some, this can be an unsafe and challenging part of what should be a standard routine. British Transport Police state that LGBT-phobic hate crimes reported across the country’s transport networks have doubled over the last five years, with reported homophobic incidents alone having risen 200% since 2013.

The second most commonly recorded hate crime in 2017-18 was sexual orientation related, with 11,638 recorded incidents. In the same year, trans-related hate crime incidents saw a 32% increase on the previous year’s figures. 33% of these involved violence against the person(s) targeted.

Despite an overall rise in reported hate crimes, the 2015-16 LGBT Consortium Hate Crime project revealed that LGBT+ young victims of hate crime have low trust in the police and fear they might face reprisal if they report their experiences. The project also revealed that LGBT+ young people lack the confidence and knowledge to report hate crimes, with a low level of understanding regarding the process after reporting. It is in this context that education about hate crime – including what it is, how you respond, and how the reporting process works – is so vital. 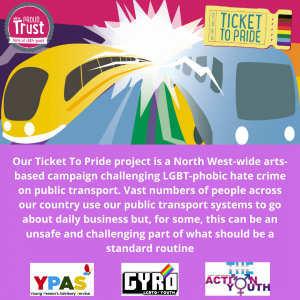 We hope to create a world in which all LGBT+ people feel safe to express and be themselves in whatever ways they like without the threat of LGBTphobic violence. And, to do that, we hope to inform and empower people across the North West, whether they are LGBT or not, to stand against hate crimes wherever they might be encountered and support those who might be targeted.

Please help us by sharing our campaign images and showing your support! #TicketToPride

For more information about the Ticket To Pride project please visit https://downtheline.org.uk/projects/ticket-to-pride/