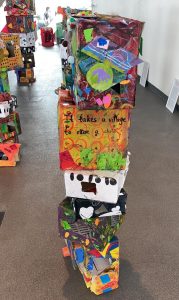 The MYA RAISE Team have been delivering a six-week mental health in the early years’ programme to 21 families with babies, infants and young children.

Each week, using art and creativity, the team explored the building blocks of good mental health in the early years. We looked at how to support the development of good brain architecture in those first 0-5 years to build mental health and wellbeing in early childhood and beyond.

A series of sculptures created by the families over the six weeks were then displayed in the Museum of Liverpool for creativity and wellbeing week. They were used to start a city-wide conversation about the importance of mental health in the early years, why our parents and carers feel judged and how we can continue to make Liverpool and child-friendly city, particularly for our 0-5 year-olds.

Over 500 people of all ages took part. The sculptures have since found new homes across the city in youth organisations, early years settings, and the Merseyside Violence Reduction Partnership Headquarters, where they continue the conversation and make early years mental health everyone’s business.