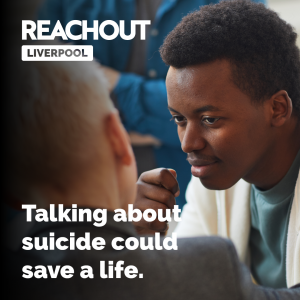 It aims to raise awareness that suicide is preventable and to remove the stigma surrounding suicide – something which prevents people in crisis from reaching out, and those around them from even mentioning the word.

The REACHOUT campaign is made up of three parts:

See the problem – raising awareness of what to look out for, including the signs, behaviours and emotions a person in crisis might be displaying.

Say the words and start a conversation – we have partnered with the Zero Suicide Alliance who offer a 20-minute training video that provides people with the skills and confidence to reach out to someone in crisis.

The campaign also reaches out to people in crisis, encouraging them to speak to friends, family or professionals and letting them know change is possible, and that they can feel better.

The campaign is aimed at two audiences:

1. People who may be concerned about someone who is in crisis or could be contemplating suicide.

The message is to encourage people to reach out and start a conversation with the person they are concerned about. This conversation could save a life. The campaign aims to: 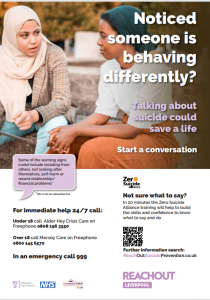 2. People in crisis or contemplating suicide.

This message is to:

For both audiences, the campaign dispels myths and breaks taboos around talking about suicide and gives information and resources of help available.

How has the campaign been developed?

The campaign has been co-created with:

Where will the campaign be promoted?